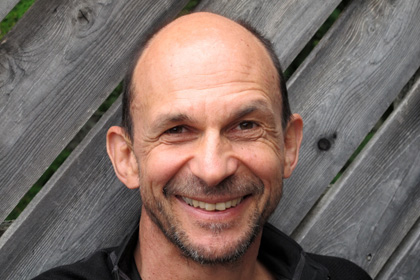 Born in Switzerland in 1956, I grew up in Japan and returned to Switzerland with my family when school started. From the age of seven, I played the recorder and a year later I started learning the cello. At the age of seventeen, feeling stuck with the classical musical training, I locked my cello in a cupboard and started to learn the guitar and later the bass by myself. Soon afterwards I played in my first school band.

Music played an important role in my life during the following years, but only in 1987, after leaving a tedious job in a bank and living in India, was I able to dedicate myself wholeheartedly to music. I mostly played the bass in various bands but soon started exploring a whole range of Indian instruments. I became particularly interested in the rudra veena and for over two years I was priviledged to be a student of Pandit Hindray Divekar. Learning the rudra veena opened up a completely new world to me. I allowed myself to go deeper into sounds and to discover a new approach to music which I call Musicality.

I am a multi-instrumentalist with skills on stringed and wind instruments – the western violoncello, guitar, bass, recorders, the South American kena and Native Amerian flute – as well as ethnical instruments from the East such as the Indian dilruba, the sarangi, the rudra veena, the Japanese kyotaku and shakuhachi flute. I also use my voice. For most of these instruments I have developed my own playing style, but my training in Western and Indian classical music has left its clear imprints on my musical expression.

During my seven years in India I was inspired by the mystic, Osho. He continues to inspire me and is my ultimate music teacher. He says: “Music is sound, but sound can be used in such a way that it creates silence; that is the whole art.”

In 1996 I moved to Quebec, Canada, where I currently live. I teach Musicality, conduct Singing Celebrations, give concerts and work as a recording artist. Since 2010 I also spent time in Europe playing and teaching.

I would also like to thank Pascale Mukti Beaudry. She has supported my musical activities over the last twenty years and we have conducted many workshops together e.g. Soufi Célébration, Spirale Sonore and many more.

Musicality is universal; every child is born with it.